Agathe manages the firm’s library and information centre, provides legal research and reference services and delivers training in the use of print and online resources to the firm’s attorneys and pupils. She also coordinates the firm’s marketing and public relations programme, leads the design and development of the firm website, Bermuda Law Blog and MJM Quarterly Newsletter, and oversees IT operations. 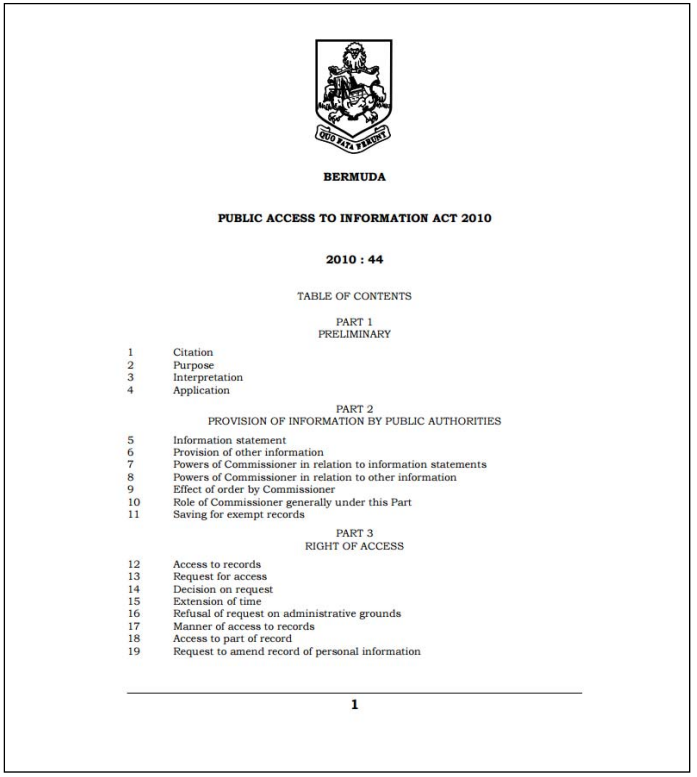 Today, there are over 90 countries worldwide that have enacted freedom of information laws, each one establishing a “right-to-know” legal process by which requests can be made for records and information held by national governments for free or at minimal cost. This legislation aims to “lift the veil” which shrouds government records, bring them to light and, as a result, promote a culture of openness, transparency and accountability.

And now, as of 1 April 2015, after years in the making, the Public Access to Information [PATI] Act 2010 has become operational in Bermuda, effectively permitting members of the public to make requests for records and information from the government.

The purpose of PATI is outlined clearly in Section 2 of the Act. It states:

Furthermore, the PATI Regulations 2014 create the infrastructure for the provision of access to information, and the Government Fees Regulations 1976 have been amended to include a schedule of fees for information requests (see Head 52A). Fees were established after a comparative analysis of fee structure schemes in other jurisdictions was undertaken and aim to promote access without imposing a financial burden that might discourage residents from making a request.

The scope of this new system in which the public has the right to access the records and information of public authorities in Bermuda is not without limitations. Although the definition of “public authority” is wide reaching and includes every entity that is funded by the government, including the Bermuda College for instance, it is important to note that public access to records is permitted within statutory parameters, meaning that there are a few instances in which access might be denied. This includes, for example, records relating to the preparation of legislation such as drafting instructions, draft Bills and draft statutory instruments. For more details, exempt records are outlined in Part 4 of the Act.

As for oversight and promotion of PATI implementation, on 27 Feb 2015 Governor of Bermuda George Fergusson announced that he had appointed Ms Gitanjali Gutierrez to be Bermuda’s first Information Commissioner, starting 2 March 2015, in advance of the Act becoming operational on 1 April 2015. Ms. Gutierrez is an internationally recognized human rights lawyer with over a decade of experience with public access to information laws.

In a statement reported by the local press in Bermuda, Commissioner Gutierrez asserts that “In many countries throughout the world, the public’s right to access to information held by the government is a critical part of a robust democracy – information has been called the ‘currency’ of a democracy. When the public can get information as a matter of right, rather than as a matter of discretion, it allows everyone to engage in public policy debates and participate in a democracy in an informed manner. This ultimately leads to better decision making, accountability, and policies.” (Source: Bernews)

The role of the Information Commissioner’s Office for Bermuda is outlined on their website, which states:

Although it will be a significant culture shift within public authorities in Bermuda to commit to making information available to the public as part of their normal activities, Premier Michael Dunkley has affirmed that “The new PATI regime will change the relationship between people and their government, conferring more power on the individual than ever before, and requiring greater levels of government accountability than ever before. It’s going to work for the benefit of Bermuda and Bermudians in untold ways – broadening understanding and confidence in the way we do business as a Country. I am proud and pleased to make it finally happen.” (Source: Bernews)