Agathe manages the firm’s library and information centre, provides legal research and reference services and delivers training in the use of print and online resources to the firm’s attorneys and pupils. She also coordinates the firm’s marketing and public relations programme, leads the design and development of the firm website, Bermuda Law Blog and MJM Quarterly Newsletter, and oversees IT operations.

“While, in the vast majority of cases, people exercise their right of access to justice through the services of a lawyer, over the last decade, there have been an ever increasing number of litigants in person appearing in the Bermuda Courts,” reads the Preface in the newly released Handbook for Civil Litigants in Person. Although not short, the 47 page Handbook is clear and comprehensive, detailed and accessible, and aims to help individuals appearing on their own behalf to navigate the civil justice system as effectively as they can.

It was reported in the Royal Gazette (May 29, 2017) that Chief Justice Ian Kawaley, who first announced the drafting of a handbook in the Bermuda Judicial 2016 Annual Report, said it would help to serve a void which members of court staff have been addressing on an ad hoc basis.

“It is hoped that this handbook will play an important role in assisting civil litigants in person, whether pursuing claims or defending claims, as well as maintaining the judiciary’s commitment to access to justice as a right available to all,” he said. 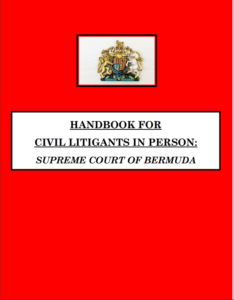 The need for a specialised handbook for litigants in the family and matrimonial jurisdiction has been identified and a similar guide is being developed for publication later in 2017.

The Handbook is available online and a limited number of physical copies will also be made available at the Supreme Court Registry in the Government Administration Building.